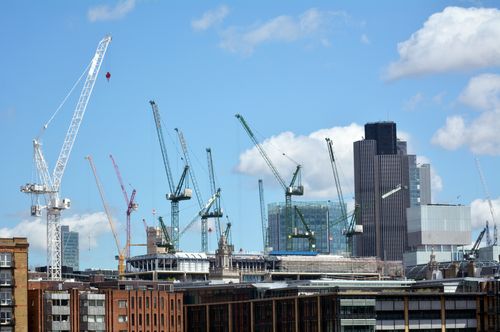 The recovery in UK construction output gained further momentum in June, according to the latest survey of construction purchasing managers. Overall construction activity expanded at the fastest pace since June 1997, supported by another sharp rise in new orders.

Growth has been recorded in each of the three main construction sectors monitored by PMI. Housebuilding increased at the fastest rate since November 2003, reaching 68.2 on the index. Commercial work was robust at 66.9, the highest showing since March 1998, while civil engineering saw a spike in activity during June, when it hit 60.7.

Construction activity has rocketed in recent months, with a sharp rise in new orders spurring the industry on. As a result, suppliers’ delivery times have been lengthened to the greatest degree since PMI began recording growth in the sector just over 24 years ago.

According to the latest IHS Markit/CIPS UK Construction PMI Total Activity Index, the base stood at 66.3 in June, up from 64.2 in May.

Tim Moore, economics director at IHS Markit, which compiles the survey, said: "June data signalled another rapid increase in UK construction output as housing, commercial and civil engineering activity all expanded at a brisk pace. The headline index signalled the fastest rise in business activity across the construction sector for 24 years. Total new orders expanded at one of the strongest rates since the summer of 2007, mostly reflecting robust demand for residential projects and a boost to commercial work from the reopening UK economy.

"Supply chains once again struggled to keep up with demand for construction products and materials, with lead times lengthening to the greatest extent since the survey began in April 1997. Survey respondents widely reported delays due to low stocks of building materials, shortages of transport capacity and long wait times for items sourced from abroad.

"Purchasing prices and sub-contractor charges both increased at a survey-record pace in June, fuelled by supply shortages across the construction sector. Escalating cost pressures and concerns about labour availability appear to have constrained business optimism at some building firms. The degree of positive sentiment towards the year-ahead growth outlook remained high, but eased to its lowest since the start of 2021."

We accompany you with expert advice for every application. For a working day in which many things become simpler and the joy of successful results increases.